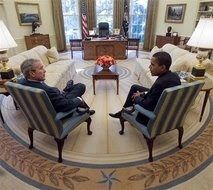 My president I voted for twice is leaving and I am sad and thankful for his service and leadership, and my president is now coming and I'm happy and hopeful for he and his family.

What? no partisanship Craig?

Hey I'm an American before I'm a conservative. Look at this photo from this afternoon. Two men in front of a desk that only 43 men have ever sat in, in our nations history.

I get a little choked up even looking at this. For all the bad that Pres. Bush had to deal with trying to enter the white house 8 years ago. (remember the taking off the letter "w" from white house keyboards). Imagine taking all the "B"'s off the keyboards (for "black") before our new President enters? How terrible.
Is there no respect for the office and the man entering it? I guess when you look at how Bush was treated for 8 years in the media (regardless of your personal feelings) you would think that President elect Obama will be getting the verbal shaft even now. Let's not!!

I didn't vote for him, I never could, unless he changed his stance on just about everything, but that doesn't change the fact that he was elected, and at that very moment they called him the winner, he became My President. I will pray for he and his family, I will pray that God will give him supernatural wisdom, and that he will actually seek God's face for knowledge, wisdom and grace every day. I will vote against everything I disagree with, and stand up against any issue that I feel he is supporting that is wrong, but I will not call him names. I will not call him names because he is my president. We may not like each others "sin' but we are instructed to love the sinner above all.

I'm sure within the next four years, there will be a garage full of things I'm unhappy about that President Elect Obama will have pushed into legislation and the courts. I'm sure he will have damaged the military as I see it, and the courts will be more liberal, replacing judges willing to take a look at the constitution and "tweak" it not "trust" it. Hopefully our currency will not have tanked, and we will not have changed our border security, homeland security and attitude towards terrorism to the point that we begin to have events again on our soil. Hopefully we will not have pushed more and more of our businesses over seas from taxation. I could go on and on, but it ends with the same statement. "I pray for and want my president to keep our country strong from invaders at home and abroad, be a good steward of our money before congress, who spend like drunken sailors (ON OUR BEHALF TO GET OUR VOTES).
I pray for unity of our people, that we can stop listening to the voices of descent that want to divide us by race, religion and socio-economic status and begin listening to the voices that speak the truth in love. That tell us the truth, not whatever is necessary to get votes and appease lobbyists.

We will not get a politician to vote for whats "right" until we are able to stop the flow of money and power that makes them vote for whats "right for them to get the voter in their pocket".
Yea, Senator McCain took public financing and has fought lobbyists for decades, but what did that get him? Any respect? Naaaa, just people from both sides saying, hey if he could have made another 40mm using lobbyist and non-profits as Sen. Obama did, he should have!
Well, the best we can do is to pray, do as Jesus instructed us to do "love above all", and humbly be involved in our democracy, standing up for what the Word instructs us to stand up for.
Render to Caesar.....
Posted by Unknown at 11:28 PM 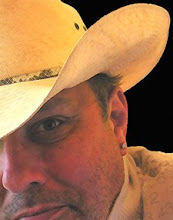